What is Rupture Disk? 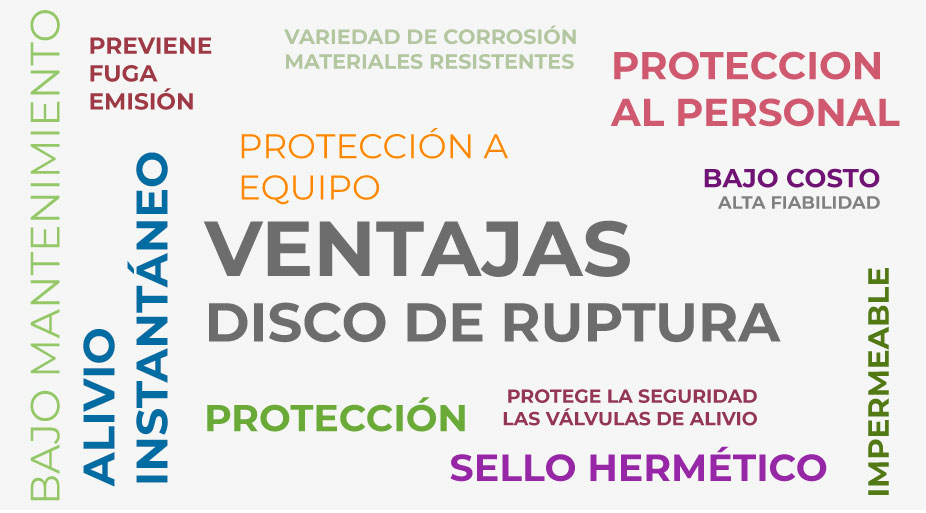 Rupture disks are non-reclosing type pressure-relief devices. It is used to protect vessels, piping, and other pressure-containing components from excessive pressure and/or vacuum. Once the rupture disk is burst out the entire vessel or system pressure will be relieved. The system will resume its function after replacing of the burst rupture disk. 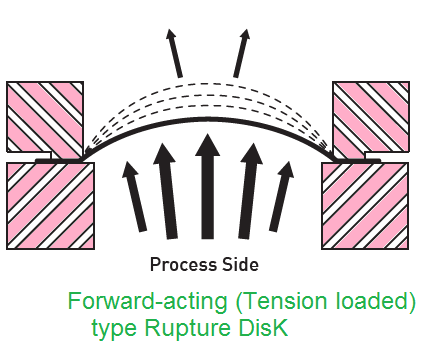 Solid Metal Rupture Disks
This type of rupture disk typically contains an angular seat design. Hence it will provide a satisfactory service life when the operating pressure is up to 70% of the marked burst pressure of the disk.

If vacuum or back pressure conditions are present, then the disk will be furnishing with a support to prevent reverse flexing.

During burst out of the rupture disk the opening configuration is random and fragment design. Due to this, they are not suitable for install in the upstream of a Pressure Relief Valve (PRV). 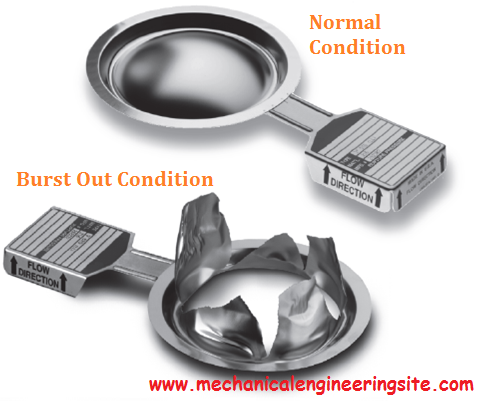 Scored Rupture Disks
The scored forward-acting rupture disk, the concave portion of the disk is designed to burst along the scored lines(Refer below figure) at a rated pressure applied to the concave side of the disk. This design provides a satisfactory service life when the operating pressure is up to 85 % to 90 % of the marked burst pressure of the disk.

This type of rupture disk will withstand the vacuum conditions without a vacuum support. But in the case of back pressure conditions are present, the disk will be furnishing with a necessary support to prevent reverse flexing.

The opening pattern of the disk will be controlling by the scored mark in the rupture disk. During bursting, the disk will not be fragmented. Hence this type of disk is used in the upstream installation of the PRV.

For the same burst pressure the scored type, forward-acting rupture disk material is thicker than the non-scored design. Also, it provides an additional resistance to the mechanical damage. 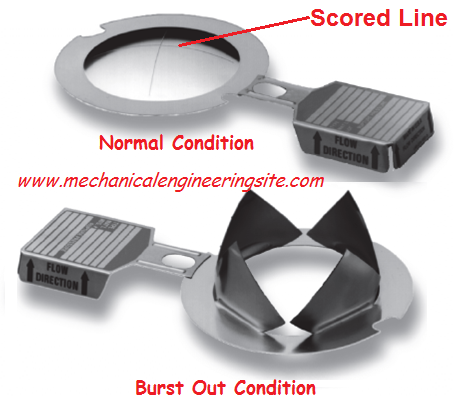 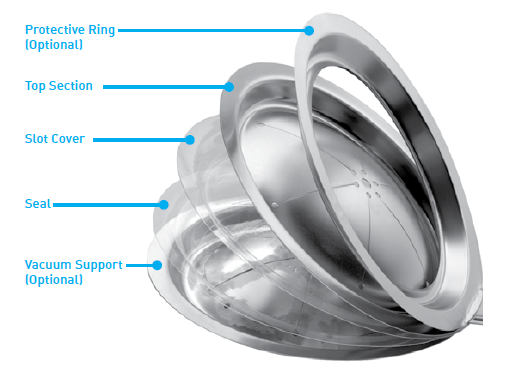 v The slits and tabs in the top section provide a predetermined opening pattern for the rupture disk. If vacuum or back pressure conditions are present, composite disks can be furnished with a support (optional) to prevent reverse flexing(refer above figure).

The composite rupture disk generally provides satisfactory service life when the operating pressure is 80 % or less of the marked burst pressure (80 % operating ratio).

The flat type composite rupture disk is used for low-pressure vessels. This disk usually comes complete with gaskets and is designed to be installed between companion flanges rather than within a specific rupture disk holder. Flat composite rupture disks generally provide satisfactory service life when operating pressures are 50 % or less of the marked burst pressure.

Reverse-acting Rupture Disks
Reverse Acting Rupture Disks are installed in a system with the process media pressure against the convex side of the disk(refer figure). As the burst pressure rating of the disc is reached, the compression loading on the rupture disc causes it to reverse and open disk by a predetermined scoring pattern. It is also called as Compression loaded type disk. 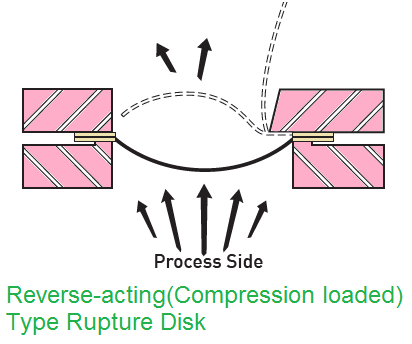 A reverse acting rupture disk provides advantages, as compared to tension-type rupture discs, which may warrant consideration when selecting a rupture disk.

Because a reverse-acting rupture disk is operated with pressure applied on the convex side, thicker disk materials shall be used. Thereby lessening the effects of corrosion, eliminating the need for vacuum support, and providing longer service life under pressure/vacuum cycling conditions and pressure fluctuations.

Graphite Rupture Disks
Graphite rupture disks are typically machined from a bar of fine graphite that has been impregnated with a sealing compound to seal the porosity of the graphite matrix (see figure). The disk operates on a pressure differential across the center diaphragm or web portion of the disk.

Graphite rupture disks provide a satisfactory service life when operating pressures are up to 80 % of the marked burst pressure. Also used in both liquid and vapor service.

If vacuum or back pressure conditions are present in the system. Then the disk will be furnishing with a support to prevent reverse flexing. These disks have a random opening pattern and are considered fragmenting designs. Hence it is not suitable for installation on the upstream of a PRV.

A metallic ring called armoring is often added to the outside diameter of the disk. It is used to prevent the uneven piping loads acts on the disk. Also, minimize the potential for cracking of the outer graphite ring.

Rupture Disk Holders
Rupture disk holders are used to clamp the rupture disk in place and effect a leak-tight, metal-to-metal seal. The seating area of the holders is typically unique to specific manufacturers and styles of rupture disks. 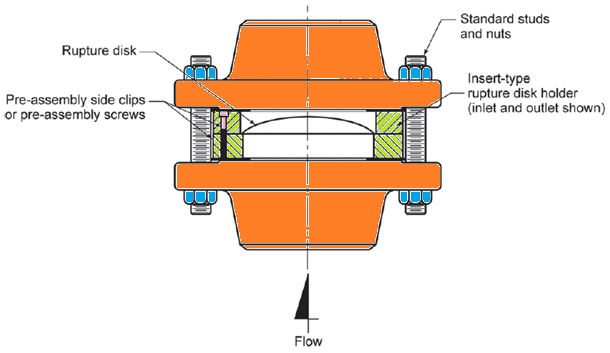 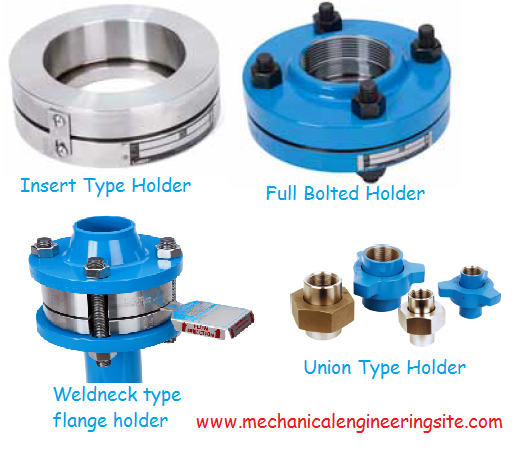 a) Rupture Disk Types
These devices typically provide an electrical or mechanical signal which can indicate the opening and/or leakage of a rupture disk.

d) Baffle Plates
When the rupture disk is opened. The excess system pressure is vent to atmosphere. For protecting the personnel and equipment from the burst pressure a baffle plate is used to deflect process discharge away. Baffle plates are also commonly used to assist in absorbing the recoil forces of an activating rupture disk.